The ﬁrst written record of Gamlingay comes from around the Year 975. From the middle of the thirteenth century onwards there is a mass of evidence about the village and its inhabitants. A disastrous fire in 1600 wiped away most of the medieval and Tudor buildings, though a handful survived both the ﬂames and the 400 years since.
The village was quickly rebuilt and a large number of seventeenth and eighteenth century houses still adorn the village today. If you walk from the crossroads down Church Street and along Church End you will pass more than thirty houses that are at least 200 years old.
Links with the village’s past are all around if you take a little trouble to ﬁnd them. This brief guide is intended to help you to discover some of them.

Note: the numbers in the text correspond to those on the map at the bottom of this page.

1. The Parish Church of St. Mary the Virgin (Church St.) 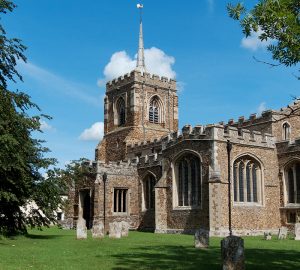 The oldest building in the village, parts of it date back to the twelfth century. Among much of interest to see inside the church are the mid-ﬁfteenth century misericords and the mass of graffiti carved by countless villagers into the very fabric of the building.
Outside, the wall that surrounds the church is medieval, patched and repaired over many centuries. The churchyard to the south is almost level with the top of the wall; this is the area where the dead were buried, until it became so full that in 1891 a separate cemetery had to be provided. 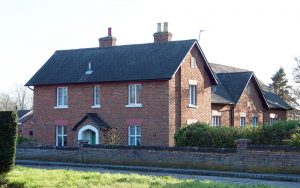 Dating from 1848, it was built as a Church of England school, known as a National School. The house at the front was for the schoolmaster to live in, while the schoolroom at the rear is now used as the Parish Hall. 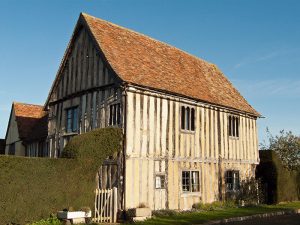 For well over 500 years the Emplins has looked up Church Street from its site near the church. Built during the second half of the fifteenth century, it was originally a rectory belonging to Merton College. Inside are a number of wall paintings of cherubs and biblical quotations believed to date from around 1600. The smoke-blackened roof timbers where smoke from the hearth made its way out through the roof indicate its original open-hall layout. 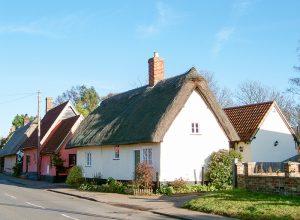 Formerly known as Dutter End, this area of the village has many buildings dating from the seventeenth and eighteenth centuries, including two ex-pubs, the Bull & the Rose and Crown. ]asmine Cottage has the date 1653 on a brick at the base of the chimney stack. 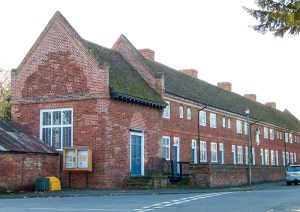 The handsome Almshouses were the gift of a benefactor who owned Woodbury Hall. He is commemorated in a decorative plaque of 1665 when they were built for “poor widows of good character”. At the east end is a former chapel of the early 18th c. The outbuildings to the rear are relatively modern. 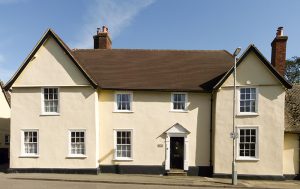 Probably built shortly after the fire of 1600, Avenel’s farm originally belonged to Avenel’s manor, until the manor was purchased by Merton College in 1599. This is of the same date as The Cock being the relocated dwelling of the Avenel family, the early Lords of the Manor, whose original house was at the extreme east end of the village. 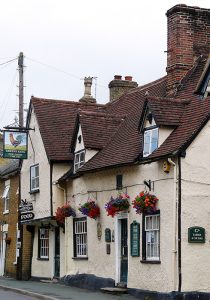 There was in medieval times a farm of this name on the site and the street was once called Cock Street.
The Cock has been here since at least 1445, although the present building was ‘only’ built some 400 years ago, probably to replace the one burned down in the fire of 1600.
The plaster-work on the east end displays, within a small oval, the convivial symbols of a flask, corkscrew and pipe amongst others. 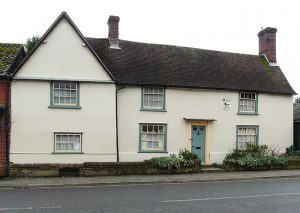 This house was actually built in the early 1600s but bears the date 1712. As is sometimes the case with dates on houses, the year 1712 refers to the completion of alterations rather than to when it was first built. 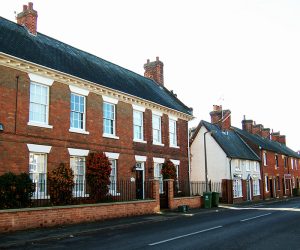 Houses have been recorded on this site for almost 650 years. They were known variously as Boleyn’s, Babbington’s & Charnock’s but the present one is known as Castle House. It was built around the year 1700 though it was reconstructed during the nineteenth century. 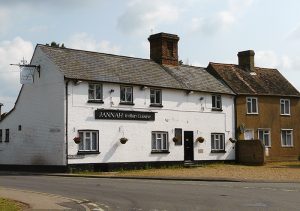 The chimney has the date 1703 on it, which is almost certainly when the house was built. It is first recorded as a pub called The Hardwicke Arms in 1758 but the building was much altered in the nineteenth century. The area in front of it was where the medieval market was held. 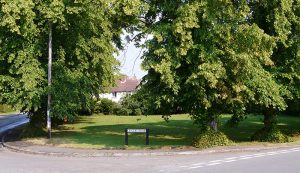 Now grassed over, this area lies near a spring and in the past was frequently ﬂooded. Carts and wagons were often driven into it to let the water tighten their wheels. 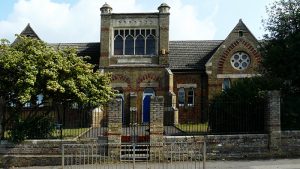 Opened in 1877, the Board School as it was known replaced the Baptists’ British School and the Church of England’s National School. Until the 1950s the school had a tall spire, but this was taken down for safety reasons. 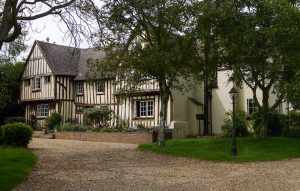 From the middle of the thirteenth century this was the site of Merton College’s manorial complex in Gamlingay. The college leased its farm from 1362 onwards. The house is from around 1500 and may have been built by Thomas Bird, who leased the farm from 1491. 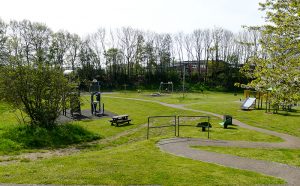 Originally a quarry for the stone used to build the church, it was later used as a place for archery practice, as the village pound, and today serves as a children’s play area. 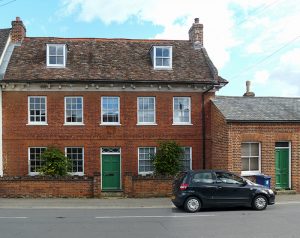 The remodelled nineteenth century exterior of Havelock House conceals a house built in 1688. It contains some ﬁne ornate plasterwork of that date by Henry Doogood. 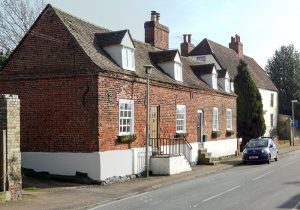 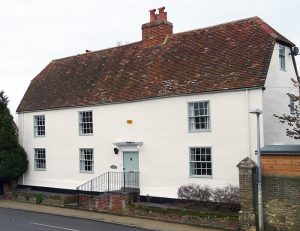 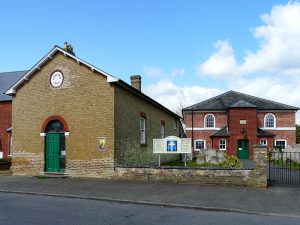 Parts of the Old Meeting House (right) date from 1710, when the Gamlingay men and women belonging to ]ohn Bunyan’s Bedford General Meeting left to set up their own church in the village. Bunyan is known to have preached occasionally in a barn in Church End. The building to the left is the Baptists’ British School, opened in 1848 – the same year as the rival Church of England’s National School opened its doors. 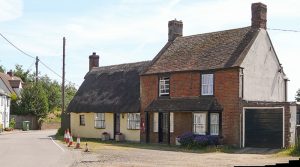 The hamlet of the Cinques is named after the boggy ground (sinks) once found there. During the middle ages and beyond it was known as Behind Well’s, after a moated dwelling just to the south-east that belonged to the Wells family in the thirteenth century. 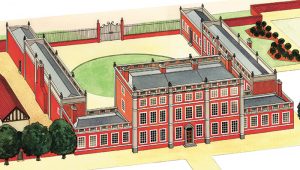 In 1712 the third Sir George Downing built an impressive mansion on his land to the west of the village. By far the largest ever house ever built in the village, it was surrounded by formal gardens, a maze, fishponds and a large lake. The house was demolished in 1776 and the materials sold. Downing’s vast estates were used to found a Cambridge college in his name. 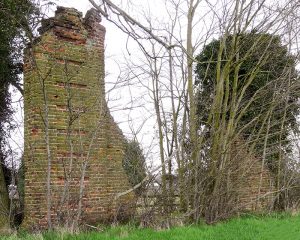 Often simply called The Moon, this folly is the only part of Downing’s Park still standing. Built in the shape of a large ‘O’ it stands on Park Lane off Drove Road. 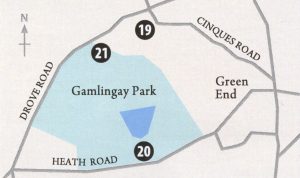 Note: the numbers in the text correspond to those on the map below.