During a recent online search I stumbled upon a pdf of Nature in Cambridgeshire, volume 34, dated 1992 (www.natureincambridgeshire.org.uk/volumes/nature-in-cambs-vol-34-1992.pdf).
It included an interesting article by Dr Oliver Rackham about Gamlingay wood, which at that time had lately been bought as a nature reserve by the Wildlife Trust for Bedfordshire and Cambridgeshire. The article featured two maps drawn by Dr Rackham, a reproduction of Langdon’s 1602 map of the wood and a couple of photographs.

It came as no surprise that the article was full of interest. Dr Rackham, an academic at Cambridge University who died in 2015, was an expert on ancient woodland in particular and the history of the countryside in general. I have three of his books – Trees and Woodland in the British Landscape (1976), The History of the Countryside (1986) and The Illustrated History of the Countryside (2003) – which are required reading for local historians. All three books touch on Dr. Rackham’s work on Gamlingay wood, investigating what he called ‘its uniquely well-documented medieval history’.

Having long been an admirer of Dr Rackham’s work, it therefore came as rather a shock to read this paragraph from that 1992 Nature in Cambridgeshire volume. Merton College owned a third of Gamlingay wood during the middle ages and Dr Rackham is here discussing the use that Merton made of their resource:
‘The biggest project came in 1358-9, when the College (about to lease the estate to a tenant) engaged Wilfred Silvester, carpenter, to build a great barn, 160 feet long. The accounts over two years detail the work of carpenters, sawyers, daubers (for the timber-framed walls), tilers, diggers and carters, and the purchase of 75,000 tiles, five bushels of “tylpynnes”, lime to set the tiles in, laths and some 15,000 nails. This vast building, at least as big as the magnificent (and older) barns still standing at Cressing Temple, Essex, cost thirty-six pounds. The wood provided 177 oaks, one elm and one ash, besides underwood for the wattle-and-daub and nine cartloads of firewood in part-exchange for the tiles. This cannot represent all the timber (as I estimate that the Cressing barns contain between 400 and 500 oaks each), but some was reused from a previous barn.’

What I found so disturbing about Dr Rackham’s words was the fact that either he had made a mistake, or I had made a major error. For in Villagers I said that the carpenter employed was called Geoffrey Silvestre rather than Wilfred, that almost 9,000 nails of various kinds and 36,000 tiles were used as opposed to the 75,000 tiles and 15,000 nails quoted by Dr Rackham, and that Simon Selkman, who supplied the tiles, received 30 cartloads of firewood in part exchange rather than the nine mention in the article.

The information about the wood came from Merton’s medieval bailiff accounts. Naturally I headed straight to the translations of them that I had made some forty years ago, and to the transcriptions I had made while rechecking the facts during the writing of Villagers.
Back in the 1970s I had worked from microfilm copies of the original bailiff accounts. Now we are in the digital age, so in order to check my translations I scanned the accounts for 1358-59 and 1359-60 into my computer. On re-examining the 1358-59 account (written, as the vast majority of medieval documents are, in a form of dog-Latin shorthand) I was relieved to see that the carpenter is clearly named Galfridus Silvestre – Galfridus being the Latin version of Geoffrey.

Equally clearly, Simon Selkman received 30 cartloads of firewood in part exchange for the tiles, as I had said. The figures of almost 9,000 nails and 36,000 tiles are also correct.
Dr Rackham stated that the costs of building the barn were spread over two years’ accounts. Turning to the next set of accounts, from 1359-60, they likewise record payments made to Geoffrey Silvestre for a new barn, involving similarly large numbers of tiles and nails, but they appear to be for a ‘new barn in the rectory of Gamlingay’. 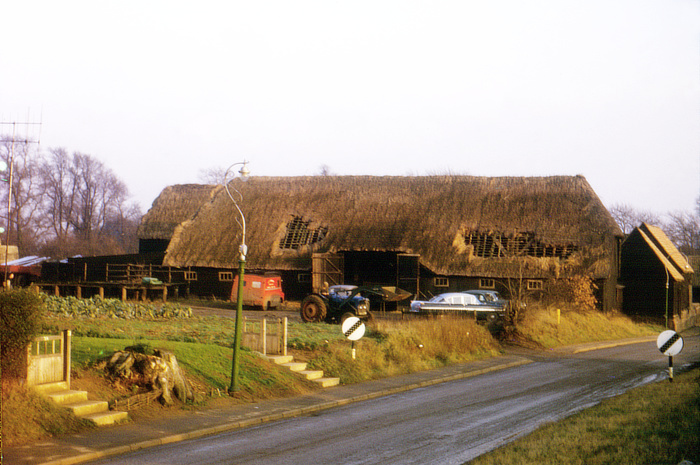 The 14th century Great Barn near Merton Manor Farm. Demolished in the 1970s

Since at least as far back as 1180 Gamlingay church had been divided into two half-shares, both known as rectories, and by 1278 one rectory had become part of the endowment of Merton College. These entries in the 1359-60 accounts almost certainly refer to a different barn, possibly a new tithe barn to hold the rector’s tithes of corn.
What seems to have happened is that Dr Rackham has unwittingly combined the cost of building two separate barns in two consecutive years, and misread some of the fourteenth century script. The Guardian’s obituary (20 February 2015) says he was a gifted linguist who read Latin verse for relaxation, but there is a world of difference between printed classical Latin and the difficult-to-read dog-Latin shorthand script used by medieval clerks.
My relief at finding I had quoted the accounts correctly is tempered by the knowledge that there are bound to be errors lurking in the text of Villagers (alongside the typos I have already spotted or that have been pointed out to me), and by the fact that although Dr Rackham almost certainly misread and misunderstood those accounts written six and half centuries ago, it does not reduce my admiration for his work or its importance one jot.