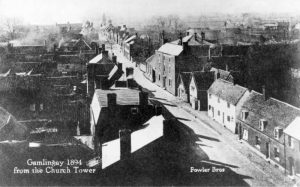 To children of my generation, growing up in Gamlingay in the late 1950s and early 1960s, late Victorian England didn’t seem too far away. The village itself had not changed very much from a century earlier, while anyone over retirement age had been born in the nineteenth century and was thus a Victorian.
Think of the 1880s and 1890s and it’s hard to avoid the familiar images of Queen Victoria at the head of a mighty Empire on which the sun never set, patrolled by the biggest and most powerful navy ever built. Britain was the most advanced industrial nation and the wealthiest country in the world.
Yet many people in country villages lived lives of grinding poverty. The majority of men were agricultural labourers and agriculture had been plunged into depression in the 1870s. It would not recover until after the Second World War.

If bad weather prevented agricultural and other labourers from working they were simply laid off without wages by their employers. There was no system of benefits as we know them today available to help poor families. If you needed assistance from the public coffers you had to enter the workhouse at Caxton in order to get it. The alternative was to accept the charity of better-off villagers who felt obliged to assist as best they could.

The recent publication of the Royston Crow on The British Newspaper Archive website [www.britishnewspaperarchive.co.uk] reveals that in the last two decades of the nineteenth century soup kitchens had to be opened in Gamlingay during periods of unemployment to keep labourers and their families from starving. The first mention of one comes from 7 February 1879:
‘SOUP KITCHEN. – An experiment was tried last week, which we have every reason to believe was a success, to supply the poor of the neighbourhood with soup at a low cost during the remainder of this inclement season.’.

The report went on to say that the Rector had organised the scheme, Mr Lowings had given a bushel of peas, Mr W Sarll had loaned his bakehouse, and that Sarll’s wife had made the soup.
‘Over one hundred applications for the soup were received, but as only eighty-three could be entertained, the others were compelled to go home without the savoury dish. The charge was 1d. per quart, 6s. 11d. being realised towards the funds in this manner.’
A quart is two pints, or just over a litre. It was not much to feed a working man’s family, but the oversubscription speaks volumes about how the poor viewed the offer.

In December 1879 the Royston Crow reported that the soup kitchen was being re-opened, this time at Mr Sarll’s confectionery shop, on Mondays, Wednesdays and Fridays at noon. The tickets, priced at a penny for a quart of soup, had to be purchased the day before.
‘We have no doubt’, said the paper, ‘but what it will be largely patronised during this hard winter.’ It also carried news that the school board had decided to remit the fees of all children ‘whose parent had not been employed four full days during the past week.’

Thereafter the provision of a soup kitchen seems to have occurred whenever the weather was bad. In January 1881 a ‘great snowstorm’ which cut off the village from the outside world for several days had ‘thrown numbers of men out of work, and only a few days ago about 60 men were discharged from the works of the Bellevue Brick Company, the weather being too sharp for their work’.
In response the poor could buy tickets for coal ‘at a very cheap rate’ thanks to the generosity of Mr Astell of Woodbury Hall. They could also buy soup from the soup kitchen at Mr Sarll’s shop, largely thanks to Mr Astell and his neighbour Mrs Kaye of Tetworth Hall.

The Royston Crow thought the soup kitchen would prove to be a great boon ‘as the frost has been most severe during the past week, and consequently great numbers thrown out of employment’. It also complained that Gamlingay, unlike neighbouring towns and villages, had not taken the opportunity to employ gangs of unemployed labourers to clear the roads of snow.

Things got worse for the rural poor as time went on and the agricultural depression got worse. In September 1887 the Crow reported on a meeting of farmers, who decided that because of the low price of corn and the poorness of the crops they would have to ‘reduce the men’s wages from eleven shillings to ten shillings per week’.
‘The prospects for the coming winter’, the report added, ‘were held to be decidedly gloomy and it was anticipated that a large number of labourers would be out of work during the winter’.

This cut in wages mirrors a similar meeting of eight of Gamlingay’s largest farmers almost exactly ninety years earlier, on 6 November 1797. On that occasion they ‘determined and agreed to give the Labour[er]s not exceeding seven shilling Per week’.
Effectively this pauperised the entire agricultural workforce. From 1797 the labourers had to ‘go on the parish’ to have their money topped up to something they could live on. The ratepayers in Gamlingay were subsiding the farmers’ wage bills.

By 1833, including the top-up from the rates, single labourers in Gamlingay were getting nine shillings a week, and a married man with four children was receiving between eighteen and nineteen shillings a week.
Contrast that with the ten shillings a week a man was being paid over half a century later in 1887. With so many men employed in agriculture the wage cut was a devastating blow. Even the cricket club cancelled its popular annual supper ‘owing to the bad times making money scarce’.
In January 1891 the Crow once again noted the opening of the soup kitchen at Mrs Sarll’s, with soup still at a penny a quart.

The effects of poverty were also seen a few months later in the 1891 census. The Crow noted a fall in population in Gamlingay of 233 since the previous census ten years before, due, it claimed, to the agricultural depression and low wages. Young men were migrating ‘in considerable numbers, especially to the manufacturing and mining towns of the north’.

By January 1894 the soup kitchen was to be found at the Cross, in Mr Knibbs’ butcher’s shop. Funded by Lady Henrietta Evans of Hatley Park, soup was now available to the unemployed on Tuesdays and Fridays, the cost slashed to a halfpenny a pint.

So far that’s the last mention of a soup kitchen that has turned up in the pages of the local press – which is not to say that it was the last time a soup kitchen was opened in Gamlingay. The fact that soup kitchens were needed at all says much about rural poverty in late Victorian Britain. No wonder young men were leaving the village in search of a better life in the towns and cities.