The following is transcription of an interview with Stan Titmus of Little Heath, Gamlingay.
It was conducted in January 1967 and was printed in the Gamlingay Village College magazine ‘Gamela’.
Interviewers:  Jane Roberts and Janet Manning. Published with kind permission of Paula Busby. 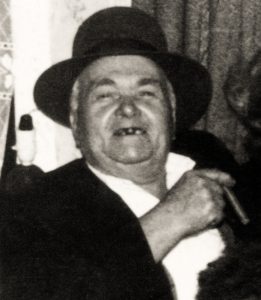 Mr. Titmus, a well-known local character, agreed to be interviewed at his home at Little Heath Gamlingay. We found Mr. Titmus to be a very friendly man. As soon as we got through the door he asked us if we’d like a glass of whisky. We asked him general questions ranging from his life to today’s fashions. He’s a man who has worked had doing many different jobs to help his family. He’s very proud of his sons and daughters and also just as proud of his grandchildren.

He built up his own pig farm, which his sons now work on. At the age of 73 he’s still got a good sense of humour finding something funny in almost everything that’s said. From our interview we gathered that Mr. Titmus had lived his life to the full, taking things as they came and is altogether a very interesting person.

Q “When were you born and where?”

Q “Have you lived in Gamlingay all your life?”

Q “Was your family a big one?”

A “There were fourteen of us. Most families were big ones and three families living near to us had 12, 14 and 15 people in. From the church to the end of Dutter End, a distance of about half a mile, there were 80 children.”

A “I think the masters were too strict, as we were hit for the slightest thing. Often we would be given four cuts across each hand. No meals were provided and there wasn’t any uniform.
The children wore clothes which had been handed down from their elder brothers or sisters. We were taught in different ways and much of the work had to be learned by heart and recited to the class if you were picked on by the teacher. Today in some cases parents and teachers aren’t strict enough.”

Q “Are your memories of childhood happy?”

A “We made them happy ourselves, playing games such as hopskotch, trundling hoops and puss in the corner. They were hard times and we had to amuse ourselves.”‘

Q “At what age did you leave school?”

A “At twelve and a half we were given half time – that is, allowed to have time off to work on the land in Spring. I finished school altogether at 13 years of age.”

Q “What work did you do when you left school?”

Q “Were you satisfied with your wages or did you wish you had more money?”

A “You were satisfied with what you received because you couldn’t get any more if you wanted it.”

Q “Do you think that teenagers today get as much enjoyment out of life as you did?”

A “I don’t think that they enjoy themselves like we did, because they have anything they want and soon got tired of it.”

Q “How did you entertain yourselves when you were young?”

A “On special holidays like Bank Holidays, games were organised by the Church or Chapel, and at Christmas tea parties were arranged.
We had cat derbys on the “Cross”. These were cats with salmon tins tied on to their tails and being raced, they made a dreadful clatter which always seemed to attract attention.
At night the alleyways were very dark and we used to tie two door knobs together, which were on opposite sides of the alley. We knocked on both doors and the people coming to answer them would pull against one another.
Another trick was to tie a long piece of string to a door knocker. We would then hide some distance away and pull the piece of string. The people would come out and find no one there. Once the old man came out and started to trace the piece of string and Bob and I fled.”

Q “When did you get married?”

Q “Did you take part in the First World War?”

A “Yes When war broke out I enlisted in the Army, in the King’s Own Light Infantry. I was 21 at the time.
I transferred to the machine gun corps. and later transferred again to France in the 6th Division. I was captured with two others and sent to work down the pits.
We were not ill-treated except for food, which was a bowl of soup and a slice of black bread each day.
After the war had finished, I was lucky enough to be on the first boat home. I was sent to Dublin in Ireland to convalesce. From there I sent to Furmore until the following September.”

Q “What sort of things have you been in the course of your life?”

A “After my first jobs on the land, I went to Yorkshire to work on farms and earned 3/- a week with free board, but had to pay 6d. a week for washing.
I was engaged on the farms on a yearly basis and couldn’t leave until the year was up. Some of the farms were good and some were tough.
My first job was at Sheriff Hutton and the next one at Cowthorpe. After that I went on a monthly basis to three places. Later on I went to work in the mining districts, working at nights; the wages were much better at 30/- a week. Walton pit was the first one that I worked at. Afterwards I left and went to Now Monkton Colliery at Royston.
The pit work isn’t so bad after you get used to it and isn’t so bad as it’s made out to be, except for the shallow seams which are only about 2 ft. deep.
The next place that I worked at was at Marshals in Feathersham for twelve months, and then I went to Emsworth Colliery. Then the war broke out and afterwards I went back to the pits until 1926.
When the war was over I attended three suppers given by different collieries for prisoners of war. We were given £10 each and 100 cigarettes. When I came home for a weeks holiday I went to another supper and met Lady May Cambridge.
On returning from the pits in 1926 I did a roadman’s job for 15 years until the second World War, and then I started my own business. On the roads I earned 29/3d. a week. Once I worked at Watson’s Bakery for over a year.”

Q “Do you believe in young marriages?”

A “Young marriages can be all right but you have to make a go of it together.”

Q “How many children and grandchildren have you?”

Q “What do you think about people getting divorce easily today?”

A “I think that people are given divorce too easily.”

Q “Do you go along with the saying, “We weren’t like that in our day””?

A “Children aren’t any worse today than in years gone by. In fact sometimes I think in our day we were worse.”

Q “Who is the most important person you have ever met?”

A “Any of the Army Generals.”

Q “Who is the most interesting person you have ever met?”

A “Well, when we were young, we used to look forward to seeing a man from Papworth ride through Gamlingay on his way to the station, in a carriage drawn by a pair of white mules. The coachman would blow a trumpet which could be heard for miles.”

Q “Have you any grandchildren that you consider to be like you were when you were young?”

A “Yes, Neil, Doug’s boy. He is mischevious and looks like I did when I was young. He likes to have a go at anything to make money for himself.
When he was 10 he used to go round with a green grocery cart and in some of his jobs I have helped him. He also likes music and can play several instruments.
I once told him we would perform together for the old people, because I like and I’m good at, singing or playing in front of an audience. I once played in some concerts.”

Q “What is your favourite meal?”

A “Boiled bacon and fresh eggs. I like good plain food and my wife always has made her own jams, pickles, wines and bread. She once made over 300 jars of jam. We kill and cure our own ham which we salt by the old fashioned method.”

Q “Have you any hobbies?”

A “Well, I like to do a bit of gardening and I keep pigs and hens. I also mend my own shoes and have made mats, with my wife. I draw the pictures on the mats and my wife makes them. We have two that have a pig and a castle on them.”

Q “Do you think television has a bad influence on us?”

A “Yes. Some of the programmes are rubbish and I don’t care for it myself and rarely watch it.”

Q “What do you think of pop music?”

A “It’s a load of rubbish. I like sentimental songs sung by a person with a good voice. Songs don’t have a meaning like they used to. They are all this ‘Yeah, yeah, I love you’ stuff!”

Q “What do you think of today’s fashions, mini-skirts, long hair etc?”

A “Mini-skirts are indecent and I think long haired boys are a disgrace. I think old fashions will come back in time.”

Q “Do you think the change from horses to machines is for better or worse?”

A “Well, they got the work done with horses just the same as they do now with machines, although of course machines are quicker. The factories have made a big difference to the village.”