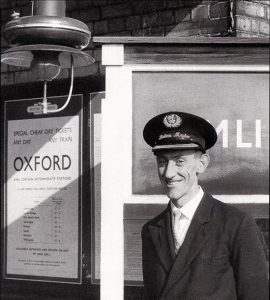 On the railways today stationmasters have become extinct, like many small stations. Very often when small stations are open they are unmanned; passengers join the train without tickets and the guard – he is either a conductor/guard or, on some of the busier lines, he is now a senior conductor – sells the tickets to the passengers. Many years ago each little village had its station with several members of staff. To many people the stationmaster was the person with the peaked cap who appeared just to walk about, doing very little, making sure everybody else was doing their work properly. Believe me that was far from being right.
My first job each morning was to open up the booking office to be able to sell tickets to passengers wanting to go towards Bedford on the first stopping train of the day. That meant unlocking the safe, counting the money to use as the float, checking the ticket stocks in the rack to make sure there were sufficient readily available, altering the date on the ticket dating machine and then opening the little window that the passengers spoke into. A close watch on the clock would let me know how soon the train should be arriving. As soon as it appeared round the corner about three-quarters of a mile from the station, the signalman would ring a hand- bell. This was the signal to close the booking office and cross over onto the far platform to meet the train.

As soon as everyone was off or on and the doors were all closed, a check on the time and then a signal to the guard that everything was in order to proceed. The guard blew his whistle and waved his green flag and then I would turn to the driver and signal to him that he could leave. This sometimes happened when it was foggy or when steam was coming out of the pipes so much that it was impossible to see through it. After this train had left it was hurry back to the booking office as there was a train to Cambridge in a few minutes. This train used to take a lot of school children to their schools in Cambridge, and also several regular adults to work.
I remember very well there were two sisters who used to travel daily. They cycled up to the station, and on many occasions I have sprinted down the station approach to see them coming up the hill just past the lodge cottage, and, providing the train was on time, it would wait for them. I think, in over fourteen years, they only ever arrived too late once.

After the departure of this train other work was waiting. There followed a visit to the signal-box at the end of the platform to see if everything was all right, and to chat to either Joe Leonard or Bill Mortimer, the signalmen, who unfortunately have both passed on, and I would hear any news of happenings between Oxford and Cambridge. The next thing to do was to have a word with the checker in the goods yard. Depending on the time of year certain wagons would have to be ordered to meet requirements. Perhaps the farmers would be lifting sugar-beet. This meant they would come down to the station and order one or two wagons for certain days. Perhaps Messrs. Wale Ltd. would be working on a large wooden box order and want to load into vans in the yard. The numbers to order would of course depend on the number of inward loaded wagons waiting to be emptied. Wagon reports were either phoned or telegraphed through to Cambridge before 10 o’clock.

In the late fifties a firm from London making grain conveyors moved to Gamlingay. They started in a small caravan in the yard of Messrs. Wright’s Ltd. I called on them to try and canvass some traffic, but they had not had very good service in the past and l could not persuade them to use rail transport. A little while later they had a very urgent order for somewhere in the south of England. Because it was a very small order, it was not worth sending it by road, so the railway got the consignment. To make sure there was no delay I wired the junction points and the destination to give priority, as this could be the start of something big. Within twenty-four hours it had been delivered, and from that point on we gradually got more and more traffic, until at the peak we were forwarding over 20,000 packages a year. This was unusual from a small station and everyone worked very hard. Not only were consignments being sent all over the country, but they were also going to many destinations in Europe.

Traffic for abroad was loaded into special ferry wagons. When there were large orders for anywhere in the UK these were loaded into large vans permitted to run at passenger train speed. On one occasion, when l was at lunch, Joe came and knocked at the door. He asked me to go down to the yard, as the local goods train had been standing there for twenty minutes; and it was getting near the time for the passenger train for Cambridge to approach. I hurried to the yard to find that the two wagons they had to pick up were fitted with buck-eye couplings (1), and neither the guard, the driver nor the fireman knew how to attach this kind of wagon, so it was left to me to show them how. Fortunately we managed to clear the line in time for the passenger train. After the firm moved to Potton I was also stationmaster there, so I continued to deal with this traffic. 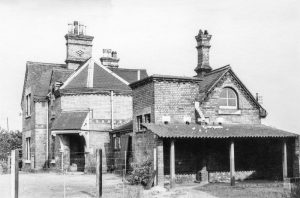 One day something really unusual happened. Between Potton and Sandy there was a connection into the petrol plant, and some of the traffic came through by rail to be emptied there, and then the empty vehicles were returned. After leaving the siding there was a very big curve on a continuous rise. On the occasion in question the wheels of the diesel locomotive could not get a grip, and they slipped. The friction sent a shower of sparks onto the underside of the engine. Many of the pipes underneath were lagged to prevent freezing, and these caught fire, so that when the train approached the station, smoke was coming up from the underside of the engine. This was really dangerous, as empty petrol tanks are much more liable to explode than full ones.

The first priority was to uncouple the engine from the wagons, but it must be remembered that these were standing on a rising gradient into the station, so all the brakes had to be fastened down securely. The engine was drawn forward and the driver and fireman left to deal with the fire as best they could. I called to the driver and told him to let me know if he needed the fire engine. I told the clerk to stand against the office door, and, if I signalled, to call the fire brigade. The driver realised that he was not going to be able to put out the fire and the signal was given to call the fire brigade. This arrived at the scene within two minutes and soon the fire was extinguished. Now the driver found that the fire had burnt the electric wiring and it was impossible to move the engine. There was a passenger train coming from Cambridge which was to pass one coming from Bedford at Sandy, which meant that single line working (2) had got to be put into operation very quickly. I had to dash from Potton to Gamlingay, complete the necessary forms in the signal-box, insert full details into the train register book (3), explain the full position to the signalman and then travel with the driver of the passenger train to Potton.

I left the train to complete the same procedure at Potton with the signalman and after having recorded what was happening, I boarded the train with the driver and made a special stop at Sutton Mill Road crossing to advise the crossing keeper that until further notice all trains would be travelling on the up line (4). I then had to move on to Sandy to carry out the same work in the signal-box, and, of course, as Sandy was a bigger station, I had to tell the platform staff. The train could then continue its journey to Bedford. Regarding the train to Cambridge, the driver would be advised of the position, and would then have to cross over onto the wrong line (i.e. the Cambridge – Bedford Line) to travel to Potton. Only when this train was ready to leave Gamlingay could it cross back onto its correct line. Special arrangements were later made to remove the failed engine into the sidings at Potton to allow for normal working to resume. 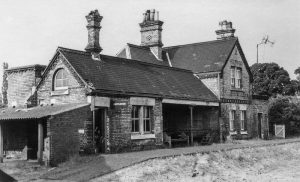 I can only remember the Royal Train once coming through Gamlingay on one night. This calls for special arrangements which I cannot fully talk about. All I will say is that there are special codes used, special arrangements made with the police and other things which collectively cause butterflies, wondering if everything will go all right. On this evening I was very pleased to see the tail light on the royal train go round the bend towards Hayley Wood and then get the signal that the train had passed Old North Road safely. The stationmaster used to find many problems to clear up that nobody except the immediate staff ever knew about.

(1) A buck-eye coupling is a special very rigid form of coupling only used in this country on the former LNER and SR. The staff at Gamlingay would have been LMS men, so would possibly never have seen these.
(2) Special arrangements have to be made when one line of a double line track is blocked. This is called ‘single line working’, and its object is to ensure that two trains never find themselves approaching each other in opposite directions on one track.
(3) A book kept in the signal-box, and in which all train movements are recorded, including any variation from the normal.
(4) ‘Up’ and ‘down’ lines are the lines respectively to and from the headquarters of the operating company. These terms originated with the stage coaches, so the practice goes back a long way. In this case ‘up’ is towards Bedford (Bletchley) i.e. towards LMS headquarters at Euston, and ‘down’ is towards Cambridge.