This piece, from the pages of FLIGHT magazine, is a moving report of a fatal aeroplane accident at Tetworth Hall in 1938.
The Avro 504 first flew in 1913 and went to war in France with the Royal Flying Corps in 1914. Very quickly obsolete as a front-line aircrat it found its role as a trainer. More than 10,000 had been built by the time production ended in 1932. Surplus military 504s were used for banner-towing, pleasure flying and barnstorming.
It’s all too easy to imagine the horror of crashing in such a flimsy canvas and wood biplane, and of being incinerated in the ensuing fire. 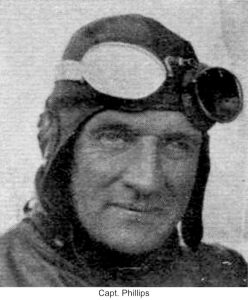 ‘DEATH OF CAPT. P. PHILLIPS
FLIGHT greatly regrets to record the death of Capt. Percival Phillips, D.F.C., R.A.F.O., managing director and chief pilot of Air Publicity, Ltd. It appears that Capt. Phillips, on his way home to Heston from banner-towing work at Hull, put his 504 Avro down in a field at Gamlingay, between Bedford and Cambridge, in order to call upon friends for lunch. In taking-off afterwards in gusty weather the machine struck a tree top, hit the ground, and caught fire.
Capt. Phillips, who had been with Air Publicity since their inception in 1935, was formerly managing director of C. W. A. Scott’s Flying Display, and had safely carried many thousand passengers as a joy-ride pilot. During the war he had seen flying service in Iraq and elsewhere.
Last summer, flying a veteran Lynx Avro used daily for banner towing, he won the Devon Air Race. Those of us who met him on that occasion and elsewhere recall him as a particularly charming and modest man, with an almost boyish zest for flying which belied his 45 years. To his equally sporting and enthusiastic wife – who was his passenger in the Avro during the Devon Race, and on many other flights – and to his two children, FLIGHT extends most sincere sympathy in their loss.’

This is of additional interest to me because my Dad can remember the crash happening. He was only eight at the time, but recalls excitedly rushing to Tetworth to see what was left of the wreckage.
Not much was left, of course, but while they were there he and his friends made a poignant discovery.
They found a packet of photographs that had belonged to the pilot in a hollow tree at the site. Whether they had been put there by the would-be rescuers or the police, or had somehow been thrown clear in the crash, is impossible to say.
As children, they didn’t appreciate the importance of the find. And being children, they unthinkingly split the photographs between them and took them home.
My Dad lost his share of the photographs long ago, but are there, I wonder, any left in Gamlingay today?