There is no evidence that any Roman ever set foot in Gamlingay.
But what about the possible Roman villa in Dutter End, the fragments of Roman pottery found on the Saxon site in Station Road excavated at the end of the last century, and the Roman coin found by the late Ken Worboys in his garden?

The possible villa in Dutter End is postulated solely on some aerial photographs taken in 1962. These show a whitish square in the first field on the left just beyond Church End. 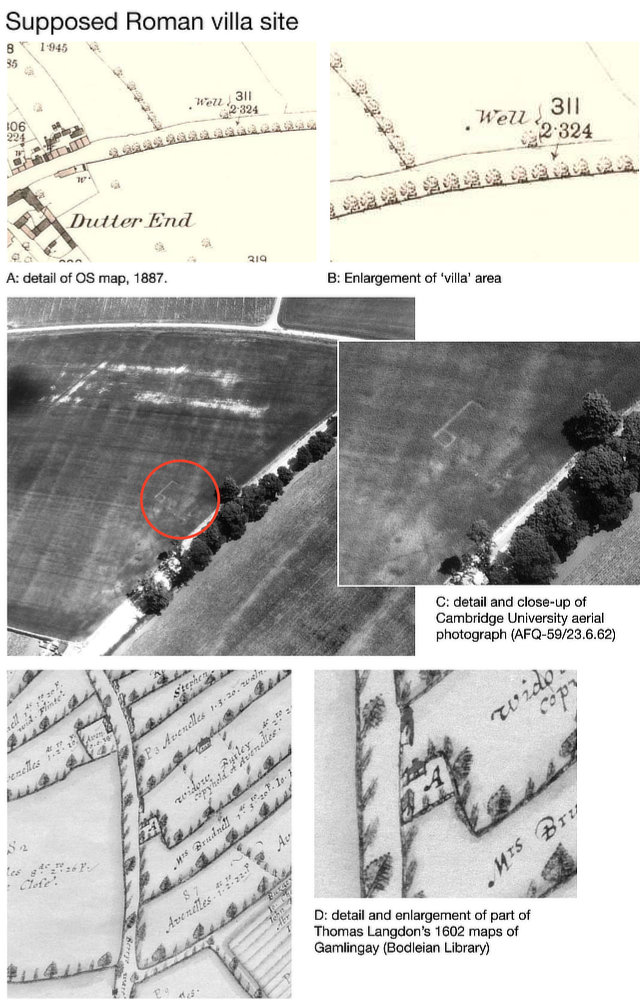 Apart from not looking like the plan of a Roman villa, that square is marked on Langdon’s maps of 1602 as the site of a house, perhaps an old medieval property or what would then have beewn a fairly new Tudor building. The house, and the close around it, have long gone, but later Ordnance Survey maps show a well by where it stood.

Roman villas – even small ones – usually produce a lot of debris, brought to the surface each year by the plough: glass, tiles, plaster, bricks, nails, oyster shells, tesserae and pieces of pottery, from cooking vessels to imported Samian ware.
There’s nothing like that in Church End. So until someone finds something Roman there it’s fair to suggest that the evidence points to the cropmark being that of a late medieval or Tudor house.
The Hatfield Archaeological Society’s report on the dig at the Saxon site in Station Road suggested that the Roman pottery was probably found elsewhere and brought in by the Saxons to use as votive offerings. Some of it was found at the bottom of post-holes.

The Roman coin Ken Warboys found in his garden isn’t, without context, evidence of Roman occupation. There are several ways it could have got there without a Roman being involved.
Oddly, though, there used to be evidence of Romans in the parish. Until 1965 the parish of Gamlingay included Woodbury, and the boundaries of Woodbury (in the shape of a large rectangle) pushed north-westwards down the escarpment on which the two Woodbury houses stand and almost across to Tempsford airfield.
Cutting across the very far edge of this rectangle is the Roman road from Sandy to Godmanchester. The best place to see the road half a century ago was at the bottom of the escarpment behind Hasell’s Hall, where the characteristic agger with a ditch each side could be made out. Perhaps it is still there.

A small section of the road is still used today. Driving from Gamlingay to St Neots via the Cinques crossroads, just before you get to Abbotsley Golf Club, the road makes a 90 degree turn to the right, and a couple of hundred yards further on makes another 90 degree turn to the left. That short stretch is the Roman road. The rest of it is only visible on maps and aerial photographs as field boundaries.
The road was made at a time when there were no parish boundaries, is a long way from the village and was only ever in the parish in the first place for ecclesiastical convenience.
There is still no evidence that any Roman ever set foot in Gamlingay. But wouldn’t it be exciting if one day something turned up to show that they did?