The windy day that tore loose a barrage balloon from Cardington, which left destruction in its wake from the trailing cable. It brought down `Diffo’ Daniels’ chimney next to Charlie Careless’ shop.

A proud Mark Dickerson when he bought his new Ferguson tractor. And his Bean hoeing machine, powered by a Ford 8 engine.

The snow of 1947 with 20′ drifts. Ernie Gore pulling the wooden V shaped snowplough with his very old Fordson tractor.

Old Jakins pushing loads of snow in his green dustcart with three wooden wheels to the Pit to await the thaw.

Harry Jarvis, who bought a brand new Commer 7 ton lorry, only to get a cracked engine block during the big freeze.

Ice skating on the fishpond in Waresley Park.

Sammy Jakes, who, at about 4’6″ always pushed his bike to and from the Cinques.

Reg Roberts, who always fascinated us by the way he rode his bike with one leg.

The old square-shape Citroen of Prince Nicholas Galitzine, a Russian exile, who lived at the Red House, Waresley. (no longer red).

King Peter of Jugoslavia and Queen Marie, his mother, who lived at Great Gransden during the war years, after being exiled by Marshal Tito.

Going to Biggleswade on a Wednesday or St Neots on a Thursday on a bus driven by its owner, Mr Omar Bartle of Potton. And Omar’s hat, a battered felt trilby.

The re-appearance of white bread after the war from William Watson in Church Street and Freddie Siggs who used to deliver it in Watson’s pony and trap.

Mr Hales, who delivered milk from a churn on a small cream-coloured cart drawn by a donkey.

Saunders shop in Mill Street, with groceries on the left, with big, black tins to hold rice, tea etc, and Maurice joking whilst he turned a perfect paper cone bag on his hand. Haberdashery was on the right, with all kinds of dusters, clothes and hob-nailed boots hanging over the counter, and, of course, those natural leather football boots with studs made from layers of leather, held on by three nails. The shop-fittings were in beautiful polished mahogany.

Not to forget Mr Savage, who had a similar shop in Church Street and a Bedford van for deliveries driven by Bill Abbott.

The cycle shop in the hut at Honey Hill.

The very upright Revd. Redfern and the Baptist Sunday School which I attended twice to get stickers of bible scenes!

Going to the Conservative Club on a sunny spring evening with them and enjoying a Wells and Winch Golden Lemon drink and a packet of Smith’s Crisps with the proper twist of blue paper holding the salt, and being served by Tom Tofts, who lost his left arm at the elbow in the Great War, but could do the most intricate of jobs, including filling his long-stemmed pipe!

Attending the occasional dance in aid of party funds with the Gamlingay Trio of Stanley Cross on piano, Vic Hughes on accordion and Joe Fuller on fiddle. And the lovely smell of the club, of wood, Tom’s pipe smoke, usually Cut Golden Bar (Jack Albone smoked Condor Cut Plug) and beer.

Later, when Jock Giles became barman, attempting to play snooker, without much success!

Another amputee of the Great War, Mr Bill Theobalds, who had a three wheeled invalid carriage operated by a push-pull tube with a hand-grip brake on each side, which must have given him the upper torso of Tarzan. He repaired boots and shoes. After the second world war, Les Barford came home with an artificial leg and was able to walk very well and drive too.

The village was buzzing too when the Far East POWs began to arrive home, and I remember the happy tears of that time. I was 13 by then.

The cows being driven up Green End to be milked by Moo Gillett. You could set your watch by them.

Taking a can to collect milk from Pete Knibbs’ dairy door. And the 1/3 pint milk in bottles with cardboard tops. You could put a straw through the centre, which he delivered each day to the school. I hated it and even more so when it was warm.

The cod-liver oil & malt in a large jar which Diffo Daniels gave by the spoonful to those he felt needed it.

Barclay’s Bank, every Tuesday morning in the front room of Mr Ruben Cade’s house opposite the Church.

And Margaret Minney next door, who cut men’s hair, singed the ends, thinned out with pinking shears, shaved, trimmed beards and squeezed blackheads as required!

And Vi Swift, a London evacuee, who had a ladies’ hairdresser’s in the shop to the left of Ken Worboys’ Garage, later to be a TV and radio shop.

Mrs Tott, who had a sweet and greengrocery shop further down Mill Street.

And Nellie Bedford, who had a similar enterprise right opposite.

The outings which Nellie organised to such exotic places as Clacton  and Hunstanton after the war, c.1946/7, using Omar Bartles or Safford’s coaches Not to mention the Hardwick Arms outings which Ted Hayes organised. The coach springs sagged from the weight of the twenty wooden crates of beer, enough for eight pints each!

At that time the pub had a painting of hooded crows in circles at each end of its name supplied by Royston Fine Ales, the pub’s brewer.

Willie Cook from Cinques Road pretending to be drunk when you knew he was not!

Joe Leonard, whose glass eye dropped out and smashed into a thousand pieces as he stood at the Cross one Sunday, a popular meeting-place in those days. Joe lodged with Sailor Bill Jarvis, who lived next to Blossom Hodge in Church Street.

Brother Bill making a festoon of lights to hang around the Cross and putting a loud-speaker in a bedroom window of the Hardwicke Arms on VE Day ready for a knees-up in the evening.

The bonfire in the Pit and Canadian airmen firing Verey Lights into the sky. They also fired them into two of Harold Jefferies’ corn stacks at Fuller’s Hill farm and set them alight.

Street lights going on again. The one at the Cross was suspended from cables between George Radwell’s and the Rose and Crown.

The very large keep left sign being put in place at the Cross.

The smell of horses being shod at George Lawmans'(?) blacksmith’s shop next to the Almshouses.

Craftsman Ralph Norman cycling to work at George Wright’s where he was a sign writer.

Watching George Wright put a red-hot metal tyre onto a wooden cart-wheel which he had just made and the steam as it was plunged into water to shrink it on. His helper was Herbie Housden.

Buying my first ice cream since before the war at Charlie Careless’ and the Standard Fireworks on top of the fridge in October – Little Demons best! Collecting “Aeroplane Spotter” from Walter Hughes every other Thursday, price 3d.

Collecting Great Crested Newts from the Pit and sticklebacks from the brook by the carrot washer.
Ken Hughes falling in and being afraid to go home!

The smell of jackdaws’ nests in old oak trees along Bankside and the owls’ nest one year in the onion Ioft along there.

Whatever became of Mazawattee Tea and Palethorpe’s Sausages which were advertised with enamel panels on every local LMS station?

Harold Jakes driving the Summerlite van around the villages and selling everything from candles and buckets to paraffin.

Dear old Harry Gifford who worked very hard delivering the output from dairy farm cowsheds to local market gardeners to increase their production, in his ex-military 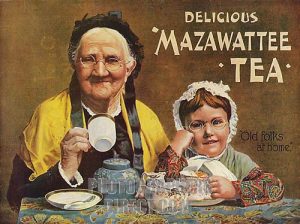 Ernie Gore, who used to leave his Fordson tractor outside the Hardwick Arms at lunch time with the engine running. Ted Hayes was the landlord. Bill Rigeley’s watch repair service in Green End

Watching the pulse in Bill Rigeley’s temple where he was wounded in the Great War. He was taught watchmaking by the rehabilitation services.