Margaret, Walter and a knitted waistcoat

Google Books is an excellent resource, a place where many out-of-print books have been scanned and made available for downloading. One volume on the site with a Gamlingay connection is called Some Account of the Taylor Family (Originally Taylard).

It was compiled and edited by Peter Alfred Taylor, MP and printed in London, for private circulation only, in 1875. The online volume is number 80 out of an edition of just 100 copies. The frontispiece features a photograph of the MP himself, balding and bewhiskered and bearing a passing resemblance to Alfred, Lord Tennyson. Beneath the photograph he has personally signed the book ‘Yrs always sincerely P A Taylor’.
Leaving aside the sincerity of politicians, most of the research into the Taylards contained in the book was in fact provided by an American, Colonel Joseph Lemuel Chester. Using his work and some further research it’s now possible to take the story further back in time as well as bringing it up to date.

The pivotal point of the story is the marriage of Margaret Chapell of Gamlingay with Walter Taylard, which probably took place around the year 1425. He was the son and heir of Walter Taylard from Wrestlingworth, who held land in Kneesworth, Potton and Waresley.
The younger Walter was a member of the Inner Temple in London, which would have given him a useful background in the law, and was often a good career move in the middle ages. Margaret Chapell was the daughter of William Chapell. References to the Chapell family are scattered throughout the records of the 13th and 14th century.

The first of the name seems to have been John Chapell, who is mentioned in the Hundred Rolls of 1279 and was probably born around 1250. He rented land and property from Avenel’s and Merton, sub-letting some of the land. He was a free man, as opposed to being a villein, and a wealthy one at that. The line then appears to go through his son (or possibly his grandson) John, then through three successive William Chapells until Margaret was born to the last of them around 1405. She was the heir to the Chapell money and since medieval marriage was primarily about property, it was presumably her status rather than her personal qualities that persuaded the younger Walter Taylard to marry her and found a dynasty.

The prosperous couple were now in possession of a good deal of property and land, and in time their union was also blessed with children – eight were still alive at Margaret’s death. They spent some of their wealth on building a chapel dedicated to St Katherine in Gamlingay church. Margaret it was who scratched the message hic est sedes Margarete Taylard (’this is the seat of Margaret Taylard’) on a pillar by the chapel, where it can still be seen today.

Walter Taylard died in 1466. By then the Taylard fortune included land at Dodington and Buckden. Margaret outlived her husband, dying in 1475, and was laid to rest in Gamlingay church beside him. Her eldest son and heir was William. He passed the estate on to his son Walter, who passed it to his son Sir Laurence. Sir Laurence’s heir was his son GeoffreyTaylard.

This is where it all gets rather complicated, but fortunately we don’t need to bother with the legal ins and outs, merely to note that Geoffrey married one Christian Leweston, and that he died in 1559. Geoffrey and Christian had two daughters, the eldest of whom died young.
The youngest daughter, Catherine, was born after her father’s death, and was the heiress to the Taylard fortune. Enter John Slade, the eldest son of the thoroughly unpleasant Edward Slade who sparked a riot in Gamlingay in 1532. John was a chip off the old block, very like his father in many ways. John Slade married Geoffrey Taylard’s widow Christian some time around 1565. Christian’s young daughter Catherine, was, as the Taylard heiress, quite a catch, and her mother and unscrupulous step-father quickly had her married off to an up and coming man from Northamptonshire called Robert Brudenell.

The marriage apparently took place in 1570, when Catherine was only some ten or eleven years old. A son arrived at some point, and was christened Thomas. Whenever that moment was, Thomas was still under age when his father Robert Brudenell died in 1599, leaving the combined Brudenell and Taylard estates in the hands of his mother Catherine. Which has explains why so much land is marked on Langdon’s 1602 maps of Gamlingay as belonging to ‘Mrs Brudenell’.
If you measure success in terms of titles, then Thomas Brudenell went on to became a very successful man, gatherering them from the Stuart kings as he went along. James I created him a Baronet in 1611; Charles I made him Baron Brudenell in 1627; and, after the Restoration of Charles II, he became Earl of Cardigan in 1661. He died in 1663. 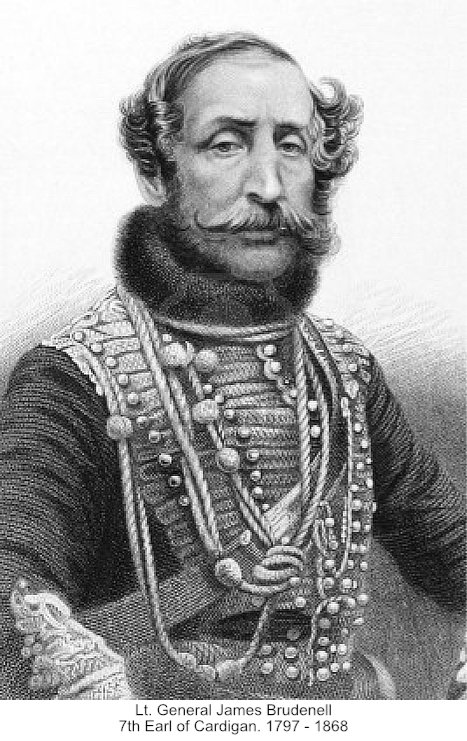 Almost two centuries later one of his descendants, James Thomas Brudenell, the seventh Earl of Cardigan, became one of the most famous men in English history. Throughout his career in politics and as a soldier, the seventh Earl was the epitome of the arrogant, womanising, extravagent and incompetent aristocrat (it’s no coincidence that George Macdonald Fraser based his Flashman character on Cardigan).
During the Crimean war he stayed on his private yacht, unfortunately arriving too late for the Battle of Inkerman, but he was there on time to lead the Charge of the Light Brigade against the Russian guns on 25 October 1854 during the Battle of Balaclava.

As the poet said of the Charge, someone had blundered, but having returned early to England after the battle citing ill-health, Cardigan was able to get his own highly exaggerated version of his part in it accepted by the public. When other participants returned Cardigan’s role came under closer scrutiny and he was proven to be an outrageous liar.
Still, he did have the satisfaction of having a type of knitted waistcoat named after him.
The current Earl of Cardigan, who can trace his roots all the way back to a peasant in Gamlingay 750 years ago, is David Brudenell-Bruce. Often in the news, he once dismissed claims by his barrister that he was short of cash by saying he was merely down to his last stately home. After getting divorced he married an American he met while having treatment at a clinic in Arizona. The new Countess brings with her a son from her previous marriage. His name is Wolfy.