Armed robbery at The Wheatsheaf 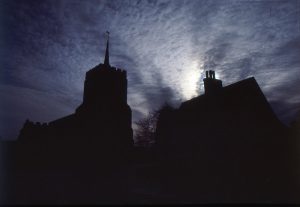 John Peak is the landlord of The Wheatsheaf public house in Gamlingay. He has been the landlord for many years and is now eighty years old.
There is a crowd of customers in his pub this winter’s evening, and helping to serve them are Peak’s married daughter Sophie Pain, and his son James.

A stranger enters the pub at around seven o’clock. As it happens, he is recognised by one of the drinkers, William Darlow, a Gamlingay man. Darlow knows the stranger as William Arnold, 23, although he sometimes calls himself Thompson, and at other times Sharpe.
An hour later two more strangers walk into the pub and each orders a pint of ale. They are William Reece and Nicholas Watts, both aged 25. Watts asks one of the villagers, Simon Norman, to join them in a drink.

Arnold slips away from The Wheatsheaf between eight thirty and nine o’clock. Reece and Watts are hungry and ask Sophie Pain if she can let them have something to eat. She says there is no meat in the house. Reece enlists the help of another local man, James Sell, and they both go out and fetch some.
When it is cooked, Reece and Watts invite Sell to share their meal. They sit at a table by the tap room window, which Sophie Pain has fastened shut with a bolt and key. Sell leaves the pub at ten o’clock and goes home. An hour later Reece and Watts, the last two customers, leave The Wheatsheaf. His father having gone to bed, James Peak checks the windows and doors are shut, then climbs the stairs to his bed.

Some time between two and three o’clock in the morning James Peak wakes up and sees a light coming up the stairs. Three men enter his room, carrying a candle and a lantern. Scared, James Peak asks them what they want, and as he tries to get up one of the men pushes him back with his arm and tells him to lie down. It is William Arnold. He has a pistol in his hand and puts the muzzle next to James’s cheek.
The two men with him are William Reece and Nicholas Watts. One of them says ‘Damn him! Throw the sheet over him’, and a sheet is thrown over his face. They vow they will murder him if he resists.
Reece stays with James Peak while Arnold and Watt go into his old John Peak’s room. James Peak hears the sound of something breaking, then one of the intruders asks his father where he keeps his money. John Peak replies ‘I have got none, you rogues’. They rifle through his clothing and discover around 30 shillings in one of the pockets. James Peak cries out to them not to harm the old man. Reece tells him they won’t – if he stays quiet.

Arnold and Watt return to James Peak’s bed, throw the bedclothes around and search the room. They find nothing of value. All three men go downstairs. James Peak leaps out of bed, shuts the bedroom door, goes to the window and shouts ‘Murder! Thieves!’.
Opening the door, he goes downstairs and finds that the back door, which had been left locked and bolted, is open. The window is locked and bolted, but the key is not there. He notices the club-box containing eight or nine pounds has been forced open and the papers in it strewn about. The money has gone. Later, a screwdriver is discovered on the floor.

John Peak dies two months after the robbery, on 25 March 1832. He is buried in the churchyard, just across the road from The Wheatsheaf.
Later that year James Peak sees William Arnold at Bedford fair. Arnold is arrested. At Cambridge Midsummer fair James Sell spots William Reece and accosts him. Sells tells him ‘You got me into trouble by my taking a little bit of meat with you; people thought I was connected with you, and my son was taken up on suspicion’.
Reece replies ‘If that was your son I heard him ask the watchman what o’clock it was when I was in the church porch’. Referring to the paltry proceeds of the robbery he adds ‘I should never have come if I had known there was no more’.
Reece is arrested. Nicholas Watts is also arrested, and James Peak identifies both men in Cambridge gaol.

It is the night of 5 February 1833. In Cambridge gaol William Arnold is awaiting trial at the next Assizes. The prison Governor is absent, conveying prisoners to the hulks prior to transportation to Australia.
Arnold and four other prisoners make a desperate bid for freedom. They each know that if they are found guilty they are not destined for Australia but for the hangman’s noose.
They have made keys to their cell doors out of the wooden buttons which fasten the shutters on the cell windows, using a piece of tin picked up in the prison yard. The prisoners open their cell doors and enter the yard. They are overheard, but before the turnkeys can reach them they quickly return to their beds. Their escape attempt is thwarted.
The trial of William Arnold, William Reece and Nicholas Watts takes place at Cambridge Assizes in early March 1833. They are accused of burglariously and feloniously breaking open the dwelling house of Mr. John Peak, late of Gamlingay, early in the morning of the 28th January, 1832, and stealing there from several pieces of gold and silver coin, to the value of ten pounds; part thereof being the property of his son John Peak, the younger.

After hearing the evidence, the court listens to three witnesses who speak for the previous good character of William Arnold. The judge sums up the case. The jury consider their verdict. It is ‘guilty’. The judge dons a black cap, and pronounces the sentences of death.
The death sentences were remitted to transportation for life. All three men left England on 3 July 1833 aboard the Aurora convict ship along with 297 other prisoners, and arrived in New South Wales exactly four months to the day later.

References:
The Huntingdon, Bedford and Peterborough Gazette of 11 February 1832 reported a daring armed robbery at The Wheatsheaf in Gamlingay.
The Gamlingay parish registers noted the burial of John Peak, 80, on 3 April 1832.
The Bury and Norwich Post of 20 February 1833 carried the news of an impudent escape attempt from Cambridge gaol by five prisoners.
The Huntingdon, Bedford and Peterborough Gazette of 16 March 1833 gave its readers an account of the trial of William Arnold, William Reece and Nicholas Watts, and informed them that the sentence of death had been recorded on the guilty men.
The website convictrecords.com.au gives details of their transportation to Australia.