The other village Baker

Leonard Roland Green was born on June 21st 1908 to Ellen and Herbert Green at 7, Orchard Rd, Trowbridge in the county of Wiltshire. He was the second child and the first son of 5 children. At a young age he wanted to be a jockey, as when he was a little lad he enjoyed riding the carthorses of the town bareback to their fields. His love of horses continued all his life and later on in his life he could often be found watching the racing on a Saturday afternoon on T.V.
The only thing we know about Dad’s school days is that he loved playing football. One day the football went over the high playground wall into the gardens beyond and he was hanging over it to direct another boy as to where it was when he felt somebody slap his backside. Thinking it was another boy he swore at the perpetrator only to discover it was the headmaster. Six of the best followed.

At the age of 14 he left school to take up an apprenticeship with King and Smith, the bakers and confectioners in the town. As he was still quite small for his age, for some of the jobs he had to do he needed to stand on an empty currant box (In those days this was how dried fruit was delivered – in 14lb boxes). Lots of products were made by hand as machinery was all a bit odd by today’s standards. The only product I remember him talking about making was glacé peel. The bakery company did outside catering, which Dad also helped with. His boss was very involved in the Trowbridge Gilbert and Sullivan Company. Dad’s lifelong love of these operettas came from doing the catering at these functions. At the age of 18 he decided to seek his fortune in London, so, armed with a watch (which I still have) and £1, off to London went he.

No lodging – No job.
We think that when he first arrived in London the Salvation Army took pity on him until he could find lodgings. Once he had found work he still had no money until payday, but a coffee stall owner befriended him and let him have food until the end of the week. He applied for work and would you believe, one of the bakeries he applied to was to become my husband’s grandfather’s business! He finally found work with a German baker in Wood Green, North London. He joined a cycling club and used to enjoy cycling from Wood Green to Biggleswade on a Sunday morning! 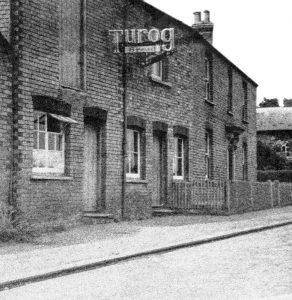 Rose Villa, Honey Hill. Originally Sarll’s Bakery, it was taken over by Len Green in 1934

We do not know how or when he came to Langford, but it was there that he worked for the baker, Mr Parker and where he consequently met my Mum Freda (Chessum). All sundry goods, i.e. sugar, dried yeast etc. were purchased from the United Yeast Company and through their salesman called Dick he learnt that there was a bakery in Gamlingay he could rent. This belonged to the Sarlls family at Rose Villa, Honey Hill. He took over in 1934 and one of the first things he did was to take the poor old and exhausted pony to the knackers yard, delivering the bread with his motorbike and side car.

For about a year he lodged with a local family. Coming home from visiting Mum at Langford he often found the two refined ladies rather the worse for drink. Many years later when Dad used to pay the council (ten shillings) to empty our toilet (a very refined hole in the ground) we discovered where these refined ladies got rid of their bottles. The Sarlls moved into 49 Mill St and on June 8th 1935 Mum and Dad were married at the Langford Methodist Chapel. Mum worked alongside Dad in the bakery until he retired and she was a keen member of the Gamlingay WI.

I was born in Aug 1936 at Rose Villa, Honey Hill, where I spent a very happy childhood and it was from there that I walked to the Baptist Chapel for my wedding in 1958. My sisters Jenny and Bibby were born in 1942 and 1945 respectively. Dad went from a motorbike and sidecar to an Austin 7 and then Ford and Morris vans to deliver bread to Gamlingay, Hatley, the two Grandsdens and later Sutton. Luckily for our family his trade was exempt during the war so he didn’t get called up, but made pork pies and other food to supply the NAFFI, which was run from the vicarage. It was not until 1948 that he bought a dough and then a cake machine. Before this everything was made by hand – the dough being made in a wooden dough trough. 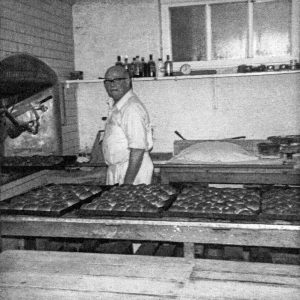 In 1959 Dad bought 16, Mill Street at auction, the previous owner being Mr Gilbert. The bakery there was bigger than at Honey Hill but the oven had not been used for about 30 years and it took Dad 3 weeks to gently fire it up.
This oven was different from the Honey Hill oven, which was a side flue oven, while this one was heated by a series of water filled steel tubes running above and below the oven floor and heated by a coke fire.
After Bibby left school she worked with Dad until he retired in 1973. They slowly stopped delivering to the villages and sold everything in the shop – including seed potatoes and chicken feed, which I remember Mr Siggs coming and weighing up. Before he retired, Mr Siggs worked for Mr Watson, the other baker in Church Street.
Dad also kept chickens, pigs and geese in the field at the back of the property. He died in 1984 and I remember him as someone who was always good fun, ready to join in and sometimes even start some of the daft things us young ones got up to.