Over the years Gamlingay History Society has collected a great deal of material relating to the village.
This is in a wide variety of formats – books, magazines, maps, press cuttings, censuses etc.
We are currently collating & digitizing as much of the material as is possible & will publish it here when complete.

Several years ago James Brown, with the help of some born & bred Gamgy types, compiled and published a small booklet illustrating the unique accent of people in these parts. All copies have long since gone but due to revived interest in this booklet we are pleased to make available a PDF copy for download here. Enjoy. 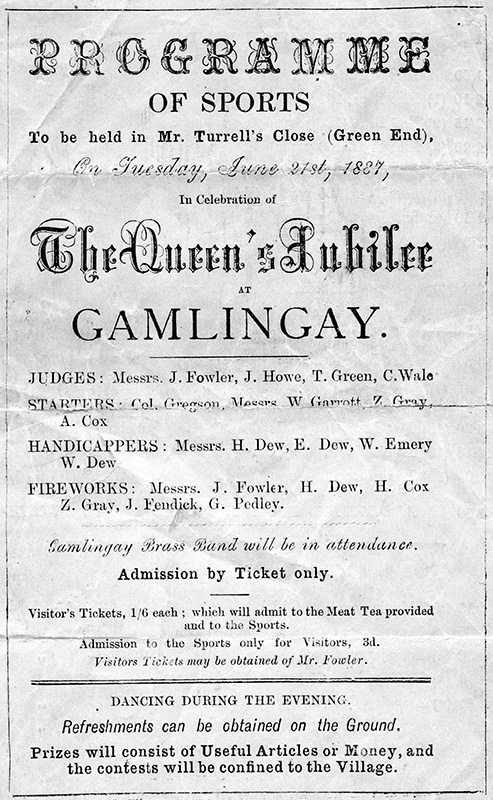 1887 was Queen Victoria’s Jubilee year, and on Tuesday 21st June 1887, Gamlingay celebrated fifty years of Victoria’s reign with a day to remember.
The festivities were held in a field in Green End, owned by public spirited farmer William Turrell, and the History Society is fortunate to have two contemporary sources in our archive that tell us about the event.

Entry to the afternoon sports contests was restricted to Gamlingay residents only, with the games being organised by no less than thirteen officials. After this, one thousand adults (classified as individuals over 15) and five hundred children sat down to a ‘meat tea’, which was included in the ticket price of 1s/6d.

Later, dancing took place to music by Gamlingay Brass Band, and the whole day was rounded off with a firework display. All this was organised by a committee of eight, chaired by Rev. Watkins, and the list of almost 300 local subscribers who supported the event shows many people giving very small amounts.

After everything was paid for, and the day done, the remaining £32.18s.02d was used during the winter of 1887-8 to help pay for coal for the village labourers.

The Bedford & Cambridge Railway Bill was put before parliament in 1860 and despite objections from the Eastern Counties Railway the Bill received the Royal Assent on 6th August.
As part of the Act, the new Bedford & Cambridgeshire Railway bought out the Sandy & Potton Railway which had opened in 1857 from Sandy to a terminus on Biggleswade Road, Potton.
Work on the line began in April 1861 with the short lived Sandy & Potton Railway closing in December 1861. Much of the route was re-laid and Potton Station was re-sited close by.
The first train containing directors and shareholders of the company departed from Bedford at 9.04 on 4th July 1862, arriving at Cambridge at 1.30 pm. 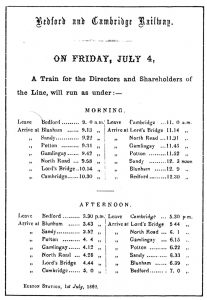 Three days later the line was officially opened for goods traffic and to passengers on 1st August, finally linking the two university cities of Oxford and Cambridge.

The Bletchley to Bedford line had opened in 1846 and the opening of the Bedford to Cambridge line provided an important cross country link between Oxford and Cambridge forming one of the few east-west routes, with the capability of reaching the east coast ports. Most services however ran from Oxford to Bletchley and from Bletchley to Cambridge.

Intermediate stations were built at Blunham, Potton, Gamlingay, Old North Road & Lords Bridge and a bay was provided at the recently rebuilt Cambridge Station to accommodate the Oxford and Bedford trains.
At Sandy the trains from Bedford crossed over the Great Northern line on a lattice bridge running down into the new station which was located alongside the Great Northern station.
A new station at Willington was added in 1906 and in 1938 a new halt was opened at Girtford between Blunham & Sandy; this was short lived however closing two years later.

From the offset the train service was run by the London & North Western Railway absorbing the Bedford & Cambridge Railway in July 1865.
In 1955 The Railway Modernisation Plan proposed improvements in cross country facilities between Oxford and Cambridge with the aim of maintaining a link between the major main line railways outside the congested Greater London area thereby allowing freight traffic to be transferred between three railway regions and easing the burden on London marshalling yards.
Within a few years the policy changed and the line was not upgraded with the Bletchley flyover remaining as a monument to the fruitless proposal.
An attempt was made to close the Oxford – Bletchley – Cambridge line in 1959 but local pressure succeeded in winning a reprieve. There was some relief when Dr. Beeching did not include the cross country Oxford to Cambridge line in his closure proposals in 1963 but just one year later, the British Railways Board published closure plans for the whole route. The introduction of new diesel trains in the 1960’s allowed British Railways to run much faster trains and the need for a cross country service declined as passengers found it quicker to travel from Oxford to Cambridge via London. The line closed after the last day of service on 30th December 1967 although the section between Bletchley and Bedford remained open. 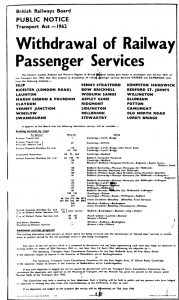 Track lifting of the Bedford – Cambridge Line began on 13th August 1968. Track was left in place between Potton and Gamlingay pending negotiations for preservation by the Sandy & Potton Steam Railway Society. Unfortunately the Society was unable to raise sufficient funds and the 5.25 miles of track was eventually lifted.

One section of the bed between Lords Bridge Station and the junction with the GER has become the site of a very long radio telescope belonging to the Mullard Radio Astronomy Observatory (Part of Cambridge University). The long level straight stretch of line was ideal for this telescope which is rail mounted, the track has however been re-laid and the gauge is now about 20 feet!

Four years after the station’s opening in 1862, a brick siding was opened just before the 30 milepost to the west of Gamlingay which was known as “Dennis’s Brick Siding” and trailed from the Up line across the Down through a gate to a brickworks. By January 1909, the siding was known as “Belle Vue Brickworks Siding” and remained in service until 20 April 1936. The siding was controlled by a 19-lever signal box named “Belle Vue”. The siding was used again during the Second World War for ammunition storage.
The station, slightly to the south-east of Gamlingay village, was situated just before a two-mile climb of 1 in 150 to Hayley Wood. The station was equipped with two platforms lit by old lamps right up until its closure, the substantial station buildings being situated on the Down platform, whilst a timber and slate waiting shelter was to be found on the Up side. A decent-sized goods yard was located to the west of the station buildings, consisting of three sidings plus a cattle pen and goods shed. The station layout changed little during its lifetime, yet the community which it served shrank from 1722 inhabitants in 1901 to 1622 in 1961.

1968 Treg Staniforth was the last Station Master along with Ticket Collector Bill Mortimer. 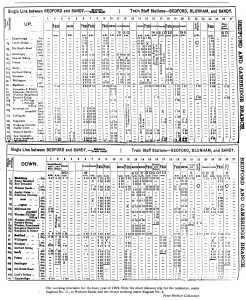 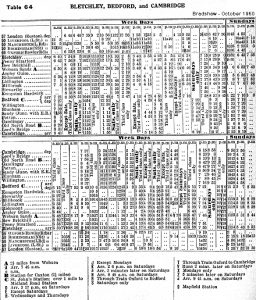 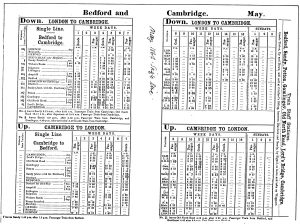 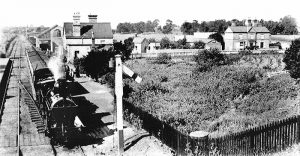 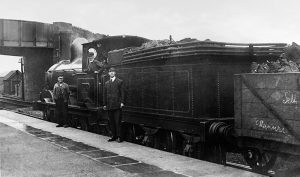 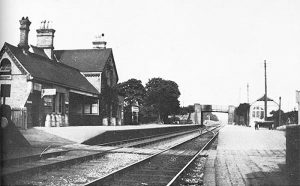