There is always more to find out about local history. There is no cut-off point, a moment when you can truly say ‘That’s all there is to discover’. As Lawrence Sterne put it in his novel The Life and Opinions of Tristram Shandy, Gentleman, published in 1760:
‘To sum up all; there are archives at every stage to be look’d into, and rolls, records, documents, and endless genealogies… in short, there is no end of it…’

A very modern and relatively recent source of valuable information can be found online. Google Maps’ vertical photographic survey is endlessly fascinating, and Googleflying can be very rewarding.
On one such ‘flight’ over the village, while looking at the area between Old Woodbury Hall. and Drove Road, lots of cropmarks were visible, most of them the crazy-paving effect caused by the last Ice Age.
And there, about three hundred yards south-east of Old Woodbury was a circular cropmark with a cross in the middle, looking for all the world like a hot cross bun. It was the distinctive cropmark left by a medieval post mill. 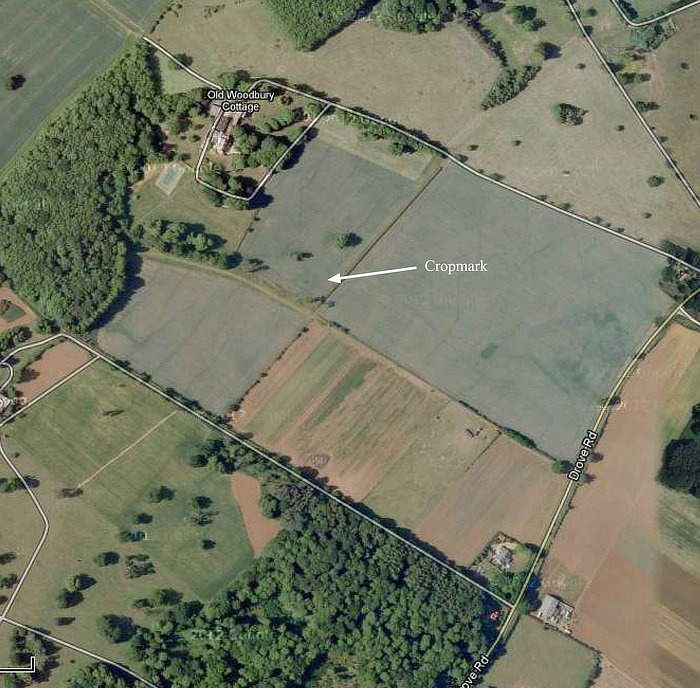 The circle is about 60 feet in diameter, and the four arms that make up the cross each around 10 feet long. The circle itself delineates the mill mound on which the post mill stood, and was probably made by the trench that was dug out when the mound was made.
Post mills usually had a tailpole sticking out of the back of the main structure to allow the mill to be turned into wind. Tailpoles often had a wheel attached to make the business easier, and the pole would no doubt have been lugged round by an ox or two, which would also leave a circular mark.

Post mills were essentially large wooden boxes balanced on a huge vertical oak post, on which they could be turned to face the wind. The mill-post was fixed to two wooden cross-members joined in the shape of a cross and buried for extra rigidity beneath a mound. Large struts from each arm of the cross were fixed to the post, again to provide a bit of rigidity.
When a mill fell into disuse all that was left on the surface was the mill mound. Most mill mounds have long been ploughed out, but often the cross-members and the circle remain visible from the air as ghostly cropmarks.

Windmills appeared in England around the year 1200. Studies suggest that post mills secured to buried cross-members are late medieval in date. From the sixteenth century on most post mills did not have the cross-members buried in earth, but were supported above ground on brick piers – as indeed the seventeenth century examples at Great Gransden and Bourn still are. 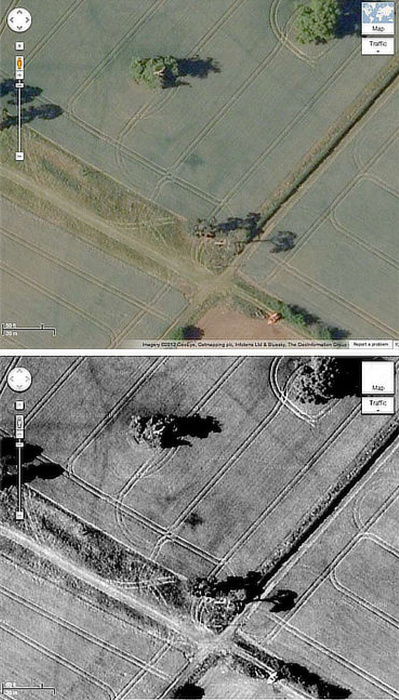 The land at Woodbury was enclosed in the 1490s and turned over to pasture for sheep. It’s very doubtful that a windmill was needed after that date. Any corn that was grown at Woodbury could easily be ground by the other mills in the village. Best guess therefore is that the post mill is a fifteenth century one.

The really interesting thing about the post mill at Woodbury is that as far as is known it is unrecorded, although there isn’t much information to be had about Woodbury during the middle ages in any case.
It isn’t mentioned in the Hundred Rolls of 1279, and if Woodbury had a mill then it certainly would have been noted. The ones belonging to Merton and Sawtry Abbey in 1279 were recorded, and by the fourteenth century Avenel’s also had a windmill, because it is mentioned in William Avenel’s Inquisition Post Mortem of 1331.

Avenel’s and Merton’s post mills stood on Mill Hill. Sawtry Abbey’s probably stood on their estate somewhere, which was situated in the triangle between Drove Road, Heath Road and Park Lane – later the Downing estate – and not far from Woodbury’s mill.
There are written records to confirm the existence of the first three, but the evidence that Woodbury had a post mill is simply a shadowy cropmark spotted on a casual Googleflying expedition while sitting in front of a computer.
Good, solid evidence it is, nonetheless. 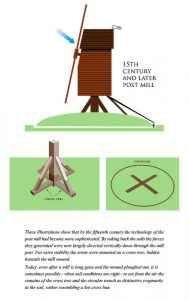 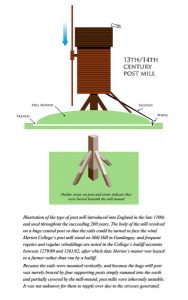