Tunnels, five roads and The Moon

I suppose it’s human nature to prefer a romantic explanation to the prosaic truth. In Gamlingay this tendency has led to many myths being taken as gospel truth.

I have frequently been told that there is a tunnel that runs from The Cock down to the church. There are variations of this story. While the destination of the tunnel is almost always the church, others supposedly start at the Almshouses, at Merton Manor Farm and at Merton Grange. Someone once even asked me about a tunnel running from the Almshouses to The Cock.
Where is the evidence for them? And why would anyone want to dig a tunnel leading to the church – wouldn’t it have been easier just to walk?

So far as I know there isn’t a shred of evidence for these tunnels, either physical or documentary. Leaving aside the actual difficulty of digging and maintaining a lengthy tunnel, you would think there would be some sign of their existence left today. There’s not much point in having a tunnel if you can’t get into it at the start and out of it again at your destination. Unfortunately, nobody has ever found the entrance to a tunnel in any of these buildings, or anywhere else to my knowledge.

Nearly all of Gamlingay’s streets have been dug up during the last hundred years, mostly for services such as mains water and sewage to be laid on, but also for other purposes such as laying cables of different types. Surely when all these trenches were being dug someone would have noticed a tunnel or two had they really been there?

When you ask why a tunnel was needed the usual answer is to mention Catholic priests and the necessity of a secret way into and out of the church to hold masses after they were banned following the establishment of the Church of England in the middle of the sixteenth century.
It’s nonsense, of course. Not only would the digging of a tunnel have been quickly noticed by the authorities, the single most dangerous place a Catholic priest could be after the Reformation was in a Church of England church.
Some wealthy Catholic families did secretly maintain priests in their homes to hold masses for them in their domestic chapels, but their numbers have been grossly exaggerated and they were mostly to be found in the north and north-west of England where Catholicism retained a hold.

The present Cock was built around 1600, a time when there was probably nobody living in the village who could remember when England was a Catholic country and masses were held in Gamlingay church. The Almshouses were built in 1665 well over a century after the Reformation, and Merton Grange dates from the early 1700s.
There’s no historical reason any of them would have needed a tunnel connecting them to the church. Merton Manor Farm dates from around 1500 and there would have been no need for a tunnel then because England was still a Catholic country.
I’m afraid the truth is there’s no evidence for any of these tunnels, and no logical reason why anyone would have needed to dig them.

There are oft-repeated myths concerning the hamlet of the Cinques too. Despite what many people believe, the name Cinques has no connection with the French ‘cinque’, or ‘five’, nor were there ever five roads there, just the crossroads as today. 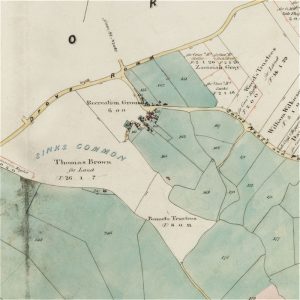 The name Cinques has only been in use for a century and a bit. For around 500 years from the thirteenth until well into the eighteenth century the hamlet was known by another name. The Wells family, first mentioned in 1230, owned a moated house and some land just to the north of modern Clock Close. It’s no surprise that it was known as Wells’s, and it is named as such on Thomas Langdon’s maps of 1602. To the north of that house stood a handful of houses called, logically enough, Behind Wells’s or sometimes Hind Wells’s.
Having been called Behind Wells’s for 500 years this hamlet gradually took on the name Sinks, meaning ‘boggy ground’, and it is called that on both the 1844 Enclosure map and the 1850 Tithe map. Similar boggy ground close by, near Old Woodbury Hall, is still called ‘Woodbury Sinks’ on today’s Ordnance Survey map.
But at some point during the later nineteenth and into the twentieth century ‘Sinks’ became ‘Cinques’, probably for much the same reason as Cow Lane is now West Road. It simply sounded more refined.

Many fanciful myths surround the brick structure not far from the Cinques, known as The Moon. When it was built by Sir George Downing around 1712 on the far north-east edge of his new park beside Park Lane, it consisted of two pillars flanking a large circular ‘O’, which stood at least six feet above ground level, supported on a brick infill.
The top arch of the ‘O’ fell in around 1880, and The Moon is now in a decayed and neglected state, but even so it remains an impressive example of bricklaying and (presumably) of Gamlingay brickmaking.
It was built as a folly, without which no eighteenth century gentleman’s seat was complete. Like all follies it was completely useless, but in a way that was rather the point. It was something for Sir George and his guests to look at through the many windows of Sir George’s new home, Gamlingay Park. 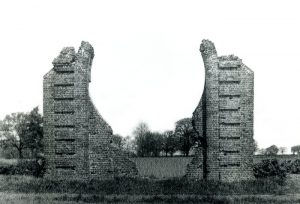 The Moon (the Full Moon Gate). A folly built by Sir George Downing at the entrance to the former Downing Estate, Gamlingay. c1920

The Moon was not filled with glass, as has been suggested numerous times, nor did Dick Turpin leap through it on Black Bess during his ride to York. The ride itself was a figment of the imagination of a Victorian novelist named William Harrison Ainsworth.
But why let fact get in the way of a good story? Even allowing that it never happened, why would someone in fear of their life and galloping from London to York along the Great North Road, divert through Gamlingay?
The base of the ‘O’ is so far off the ground it would be remarkable if a horse and rider could clear it. If it had been filled with glass, a feat probably beyond glass manufacturers at the time, then crashing through it on a horse would have resulted at the very least in severe lacerations to horse and rider and might well have killed them both.
It has also been suggested that the ‘O’ formed part of a series of similar structures that spelled the word DOWNING, presumably because Downing has an ‘O’ in it.
There is no evidence at all for this assertion, and if it were true there really should be some surviving foundations and brickwork from the other letters. You could also ask how the ‘G’ would have been formed, and why such an outstanding feature was not mentioned in the newspapers, books and letters of the period.

To sum up then, don’t fall for the tunnel stories until somebody actually shows you a tunnel, accept that Cinques is just a posh version of Sinks and nothing more, and admire the brickwork of Downing’s folly while it is still there. That’s the prosaic truth.